ProbeApp for Mill & Routers that integrates with Centroid CNC12 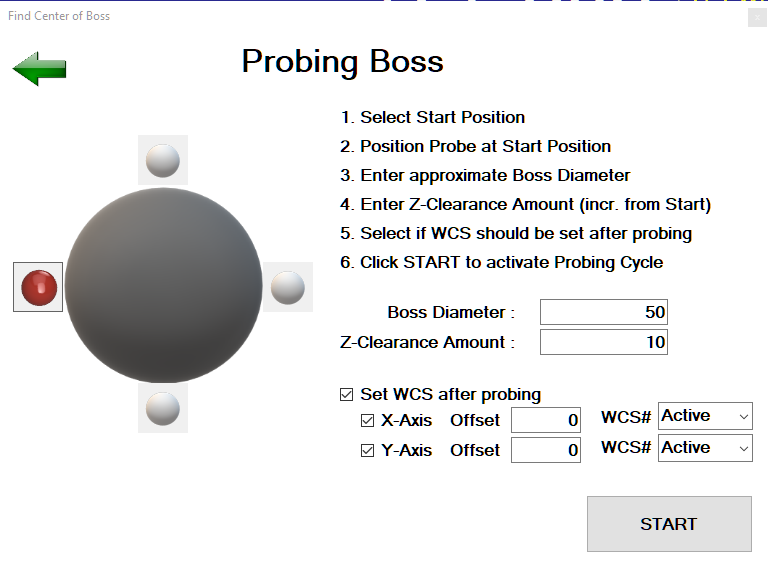 Find the center of a Boss. This probing cycle is not available for CNC12 Free.

Four possible starting positions are available for the Boss Probing Cycle: Left, Right, Front or Back. The probe needs to be placed at the selected position. The Z-Height has to be set at the level the measurements needs to be taken outside the boss.

The probe will make the following moves and measurements:

Note that this message can be surpressed if “Set WCS after probing” is checked and the configuration settings have been made to skip the measurement display. See Configuration Options for details.

If “Set WCS after probing” was checked, the WCS reset message will be displayed: 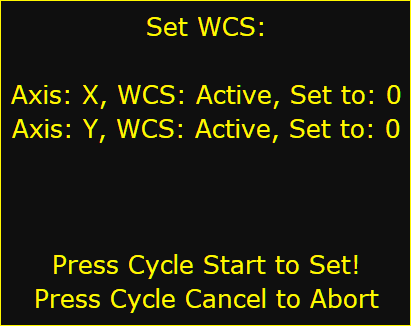 Note that this message can also be surpressed if a direct WCS reset is desired withou a prior WCS Reset Info message display. See Configuration Options for details.

The Boss Diameter specifies the approximate diameter of the boss and is being used by the probing cycle to calculate the distance the probe needs to move to measure the opposite side of the boss. Be generous with this amount and rather error on the plus side rather than being too small.

If this amount is too small, the probe will be tripped while trying to move down on Z to get to the probing height. When this happens, the retry cycle will be activated that will advance the probe in increments until it’s clear to drop down on Z. Should the retry cycle hit any limits (e.g Probing Search Distance or travel limit) the probing cycle will be aborted with an error message.

The Z-Clearance Amount specifies the distance the probe needs to move up on Z from the start point to traverse the boss to get to the opposite side. Be generous with this amount and rather error on the plus side rather than being too low.

If the WCS box is checked, at least one of the Axis needs to be checked too. By default, WCS 0 for the axis will be set at the center of the bore hole for the currently Active WCS.

Both axis allow to set WCS 0 at an Offset from the center if needed. For an offset in the negative axis direction, a negative value needs to be entered.

Note that the available WCS numbers depend on the version of CNC12:

Any of the available WCS # can be selected to be reset by the probing cycle.

After making all the selections necessary on the screen, pressing the START button will start the parameter validation. A message will be displayed if any of the parameters are missing or invalid

If no validation issues have been found, the ProbeApp will write all the necessary probing commands to

The ProbeApp will close giving control back to CNC12

At this point the Probing Cycle can be started by pressing Cycle Start or aborted with Cycle Cancle.

The Probing Cycle screen can be closed by either pressing the X on the top right corner of the window or pressing the Green Back Arrow on the top left. This will open the ProbeApp main window where the Exit button can be pressed.

Control will go back to CNC12 where this message will be displayed:

Pressing Cycle Start at this point will also terminate the cycle.